"It was The Best of Times, But All Walls Soon Fall." 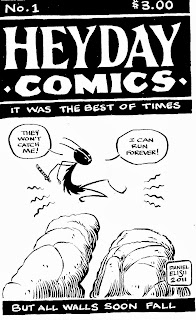 This 2011 mini-comic explores a dark and fantastic world, following a lost soul (The Animus) and his music horn. Artist & writer Daniel Elisii dishes up, in this first book, a story where the subjects are deeply rooted in a dreamy-psychedelic and metaphorical landscape similar to comics from Sam Kieth, with a tendency towards mythology and a managed use of archaic English, all illustrated in pen and ink with a simple stylistic flare. To summarize, an original and fantastic find.

Elissi's illustrations take fanciful myths and language and add a hint of schizophrenia, as the protagonist speaks mostly to his horn. A poetic voice going out into the void, similar to The Stranger in the film It Couldn't Happen Here, during the song "Always on My Mind," by the Pet Shop Boys. The dark solid figures and shadowy landscapes juxtaposed to empty spaces seem to play with the exterior of some shadow world, like the spirit worlds depicted in indigenous-American folk lore, but with a noir twist. The Animus seems surrounded and trapped in a fate already drawn out for him and his horn, as he runs through landscapes that tend to become larger, darker and overwhelmingly detailed as the panels progress towards its rhythmic end.

Where can one find this comic?

Visit Elisii's virtual presence for this work and more, including shops to find comics and  news at:
http://www.insectash.com/


What follows is my response illustration to Elisii's Animus:

Posted by Subterranean Art Jive at 10:34 AM