How Yellow Daisies Ended Up on My Book Case

Before I “blurb” about Amara Leipzig’s Yizkor I feel I should start off with how this comic came into my hands. The second paragraph is the direct musing on Amara Leipzig’s book.

During The Hand-Made Library at the Archer Ballroom, Feb 24, 2011 south Chicago. I stumbled in, holding a six pack of King Cobra’s, pockets filled with loose change and my own hand-made comic. My agenda for the evening was to pass out what few copies I had of my eight page zine, get slightly toasted, and perhaps get some interesting "do it yourself" (DIY) books in return. I was expecting to get a bunch of zines, or Cd’s in exchange for my little comic. At the end of the night, before the performances and readings submerged into the mesh of King Cobra’s, boxed wine, watery chitchat with people I’d never meet again and some I’d like to, I found myself sitting at a long foldout table sewing pages of poems by the featured readers in a glittery book. These cats had me doing all the work, which was fun, and a great way to meet some of the other people there. Amara Leipzig was one of those people binding the “Hand-Made Library” book, someone whom I had heard briefly about before the event, a fellow comic book maker and so there was already a motive to speak with Amara and perhaps get a copy of her zine. Having had exhausted the three comics I brought, I had nothing to give her in exchange except for a promise to someday soon give her a copy of my work and to read her comic/zine.
Yizkor
Skimming over a random page (maybe page 8) I thought, oh another comic about WWII. Not that there’s anything wrong with writing about the second great war, but that horrific event has become a stylized genre and those wishing to tell stories about it walk on well treaded territory, thanks to archetypes previous films and books have giving us. But that’s a rant for another blog. Yizkor in a nutshell is a story on storytelling, which the title Yizkor (remembrance) ties into. Along with this framework are themes of identity, family, loss, displacement, and womanhood. The story arch of Yizkor jumps smoothly to and from time, and at the core are yellow daisies which link the various scenes together. Whenever daisies are present in the book so is the color yellow—hinting to the significance of the image. A tactic used in many black and white comics, and is well executed here. As a result one finds a moving story that spans three generations merging time and characters into a single moment that could be told in less than 26 pages. The artwork is simple and well suited for the subject matter, not allowing needless details to unbalance the story. The panels themselves read with such delicate pacing that one can’t help notice that this comic must have meant more than just a side project or classroom assignment, but rather a lingering shadow of a story that screamed to become tangible in someone’s hands.
I walked away from The Hand Made Library with more than just a future hangover and stain-glass memories of performances and faces. I walked away with Yizkor— 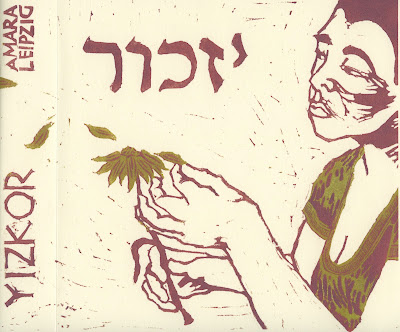 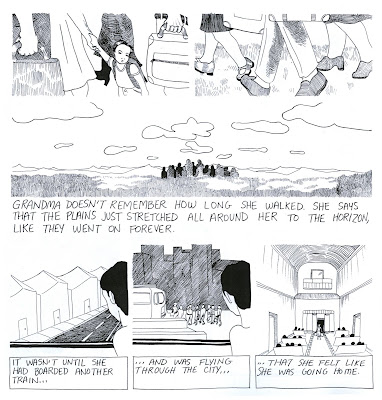 Yizkor, by Amara Leipzig, printed and published in 2010 in Chicago, Il. Available at Quimby’s. For more information contact amara.leipzig@gmail.com

(All images posted here belong to Amara Leipzig)
Posted by Subterranean Art Jive at 12:43 PM No comments: Links to this post