Dreaming of Chicago's Inside: HI typ/O "Rebuilding the Salon" by Miranda Steffens


On November 7, an intimate group of writers, performers, artists and supporters gathered at Side Project Theatre in Rogers Park for HI typ/O “Re-building the Salon Presentation.” The theme of the event was from the larger Chicago art event was part of the Chicago Artists Month event, 'City as Studio.'

Upon entering the lobby, members of HI typ/O, Rebekah Hall, Jill Stone, Kevin Sparrow and others greeted us with offerings of potato chips, sparkling water and single-serving bottles of red wine. Ji Yang sat behind the table of food and drinks while he opened packages of wooden chopsticks and taped them together, end to end.
"What are you doing?" I asked Ji.
"Taping chopsticks," he simply replied.
"For a performance?" I pressed.
He did not respond, but nodded briefly.

The set began with some opening remarks by Rebakah Hall, who gave a brief background of HI typ/O. She references the artist and professor, Matthew Goulish, whose class, Abandoned Practices, inspired the group's beginnings. "You need the freedom that the possibility of lack of results brings. Without that freedom there is no discovery. . . You have to be okay moving into the unknown," she quotes Goulish. The salon is designed for artists to explore, try new things and respond to each other's work in the form of new creative pieces.

Alex Shapiro then read a poetry piece, "A City's Insides," referencing the cracks of the city. Rachel Blomstrom followed up with a make-believe history of the Shed Aquarium, involving the founder's somewhat unusual relationship with a coy fish. Then we left the theatre space and returned to the lobby where Ji was finishing taping chopsticks together to make what was now clearly a cross.

Ji's performance began with the question, directed towards an audience member, "Do you have a dream?"
"Yes, I have a dream," she replied.
"Would you like to tell me what it is?"
"To spend a year traveling the world," she told him.
"Very good," he said, and he took a potato chip from the bag of Lays. He placed it into her mouth and poured wine from one of the small bottles into the cap, handing it to her to drink like communion.

Ji's performance ended with a walk to the lake, the cross of chopsticks tied to him with the use of a long, red cape. We followed him as if he was a religious leader, only he did not preach religion. We followed him down the chilly street towards Lake Michigan for the sake of his art, for the poetry he expressed about Chicago being a beautiful city. From an outsider's perspective, of course it looked like we believed he might be the next Jesus Christ. As we walked, some pedestrians stopped and stared. One woman standing outside a Pace bus asked, "Who is he? Who is he?" and we smiled at her or pretended not to hear, unsure of how to explain.

As we walked, he reminded us that Chicago was six inches higher than it currently is, now that it has been built up atop a marshland. He proceeded to suggest we continue the change we have begun on this city, and make it warmer. He proposed we turn the suburbs into a landfill, raising them into small mountains, thus turning Chicago into a valley. It would raise the temperature by an average of 10 degrees, he argued loudly and passionately.

Many of us stood in a semi-circle shivering slightly in the setting sun of the crisp fall day; the idea did not seem half-bad.

We returned to the theatre, stopped to admire Alex Shapiro's sidewalk poetry of words made of earth. Inside, Andrew Rutherdale impressed us with a demonstration of how a Kombucha Scoby can conduct electricity. Kevin Sparrow read his concrete poetry, each poem referencing and honoring a famous Chicago building. Chelsea Fiddyment read, "How to Sleep with Men," which explored age and its affect on  relationships. The event concluded on an energetic note with Vaudezilla Studios' dance, “The Fanaticz."

The varied performances stretched our minds into new ways of thinking about our home, the city of Chicago.

Miranda Steffens is a poet and essayist living in Chicago. She is the author of lyric essay book, Peripheral Vision, published by Meekling Press. Her poetry and prose have appeared in Entropy, South Dakota Review, Hoot Magazine, Apple Valley Review and Upstairs at Duroc. She received her BA in Creative Writing from Knox College and her MFA in Writing from The School of the Art institute of Chicago. She currently teaches college English and ESL. Visit her blog at: https://mirandasteffens.wordpress.com/

HI typ/o is a space for community-based, collaborative art-making in dialogue with fellow interdisciplinary artists. Visit them here: http://hitypo.tumblr.com/ or here: https://twitter.com/HItypOsalon
Posted by Subterranean Art Jive at 12:17 PM No comments: Links to this post

This may very well be the longest Subterranean Art Jive title posted yet, but the blurb shall remain condensed for online readability for this wonderfully simple viddy-game. 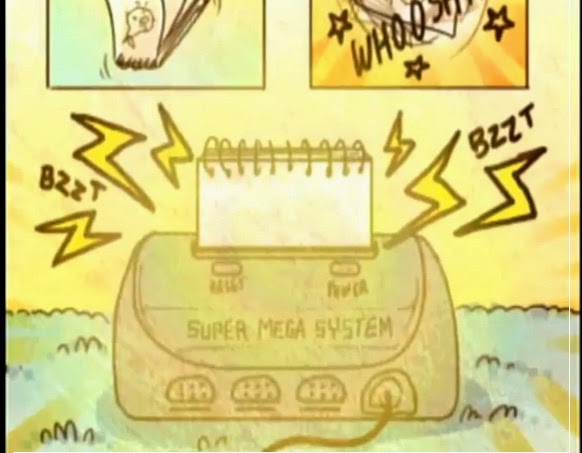 But first, a small rant on video games and art. In the past few years, home brew video games have been popping up and gaining steam on almost every platform. Many of these games possess artistic flair and creativity that many big companies seem to avoid in their AAA video games, since they tend to recycle patterns and game-play that is popular. For example, when Street Fighter 2 came out in the early 90's, many fighting games followed suit. Still, even with this growth and imitation game there is still artistic sensibility with large and small companies. This may be obvious to some, but many mainstream games can be classified as art and this, I think, can be seen with the recent Smithsonian exhibit, The Art of Video Games (2012) --not to mention the many recent exhibited forms of gaming and game mechanics of mixed-media and glitch art. Additionally, like all art forms that tither on the realm of art and pure entertainment, some of the principles and opinions about what makes one of these pieces art can be considered art in one arena and not in another. Regardless of the intention and vocabulary used to suggest a video game is art, one must agree that much of what goes into the process of a game is art. Thus, even if the final product is pure pixelated entertainment, the design, the visual effects, concept and what may be the most defining factor here, the game play which may challenge a player to think about the real world and the digital world in ways they never really thought of before. For example the game Rez or LSD: Dream Emulator all come from an artistic sensibility. 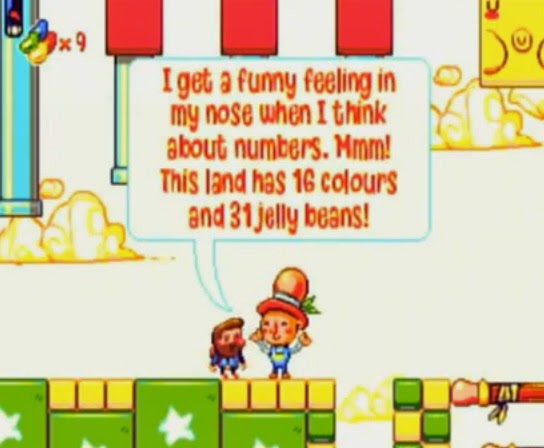 On with Polyko's Super Jelly Bean Quest in the Sketchbook of Illusion by Hotpengu and ported by Senile Team. Polyko offers something different from a mere Mario clone. It is serine, meditative, and while it feels a bit like a tribute to the games of yore, it is original in its execution. This game is made by and for people who love classic platforming in surreal environments. Everything seems alive and interactive, similar to the old meta-games of the past or a Looney Toons episode, and much like its genre it focuses on jumping from one platform to the next to collect items, in this case jelly beans. One cannot die in this game, nor are there enemies to fight. The story follows an artist who falls into the pages of his sketchbook. The graphics are vintage, but well-done and will last for years to come, like Super Mario 3, Rayman or Astal. The game focuses purely on exploring this small yet complex and puzzling world, one level, collecting jelly beans, and playing for the sake of playing. It seems almost like a taste of nostalgia, and the taste is that of 31 flavors of jelly beans. It is a game made to inspire memories of the past or to encourage one to create a dream world of ones own. The game is imaginative, though short, and after playing I found my self wanting to draw.
Senile Team is becoming one of the most well known homebrew developers out there, stretching from games playable on the Sega Dreamcast to computers and even more recent platforms, like Xbox 360, Playstation 2, etc. Senile Team is responsible for one of the most popular homebrews, Beats of Rage, an open source game inspired by the Streets of Rage franchise.

There are a number of ways to play this game, however I'll list one option that is the most fun, playing on your Sega Dream cast (if you have one) and freely downloading the game to a disk from the Senile Team's easy to navigate website: http://www.senileteam.com/polyko.html

Posted by Subterranean Art Jive at 4:07 PM No comments: Links to this post