Machismos Waiting for Monsters: A Review on Monsters: Dark Continent

From the first agonizing 15 minutes or so, before fast forwarding nearly the entire film, looking for monsters that I now hope killed off the entire cast of characters, I realized I don't hate myself enough to waste 119 minutes of my time on a film that should probably not have been made to begin with. While the film does not have the energy I was hoping for, Monsters: Dark Continent, directed by Tom Green, does have some interesting aspects that separate it from other horror/science fiction films. For instance it focuses on characterization, mood and tone, and it connects social, economic and other issues of war and violence to the backdrop of a monster invasion. However, this might be part of the issue, that the Monsters are more of a backdrop for other events of an unlikeable cast of a machismo person's fantasy.


The story centers around what is supposed to be a reluctant soldier/street-smart tough guy, who begins the film's dialogue with, "Put a bullet in an alien." This is spoken over footage of him emptying a clip into a wall covered in graffiti. A scene that’s supposed to illustrate his bad-assness, but it all feels forced. Right from the start we are shown and told, this is the sort of guy who romanticizes or practices snuffing monsters. But it’s done in the same way that a socially awkward barfly might try to reiterate that they are tough while slouched over his drink and then give you one weak example after another.


Later, he meets up with his grab-bag group of cliché frat boys, and while doing so, the film found a 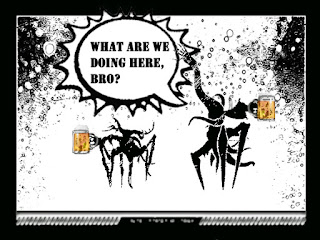 way to send the message that women are personality-less sex toys and baby makers. This little subtext becomes painfully clear when the guys meet up with frat soldier #3 and he immediately abandons his girlfriend after she's just given birth to his son. He abandons her to hang out with his boys and there is no more reference really to that. This later relies on other tropes of the stereotypical machismo male, like the Badass as a Macho, stereotypically manly guy banging hookers and snorting cocaine. This is also blended with the Jingo trope, a soldier who’s excited to serve his country and engage in combat. Because all these rely on a similar mindset and point of view it’s difficult to not only distinguish them from their machismo attitude of war and women but to really identify with them.
There are only about three scenes with women. Each scene is unapologetically sexist and panders to not only a male audience, but doesn’t offer anything different. They could have easily filmed this movie without any women in it at all, but clearly went out of the way to portray them in the most degrading way possible. This was a bit strange because the first movie is actually a bit more balanced as far as the two roles go.

Overall, much of the carefully placed themes and action was so buried under macho gun play and man vs. man battles with almost no monsters whatsoever, that the underlying message gets fuzzy. The cast is so frat-house and relies so heavily on the archetypal tropes they personify to carry anything beyond the weak plot of a war based videogame’s downloadable content –in which, this might have actually been more successful. The main characters are one dimensional and immediately dislikable. The movie itself did more than fall flat, it is downright terrible.

Shuvon Hernandez
Posted by Subterranean Art Jive at 8:02 PM No comments: Links to this post